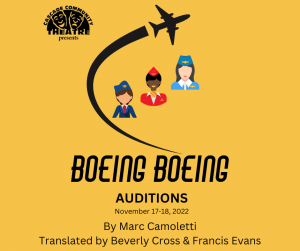 Auditions for Boeing Boeing will be held Thursday, November 17th and Friday, November 18th, from 6-9pm at Tolt Congregational UCC, 4851 Tolt Ave, Carnation, WA 98014 (Across the street from the library).

Performances will be the first week of March, 2023.

American playboy Bernard Lawrence is an architect based in Paris. He lives with his fiancée, TWA airline stewardess Gloria—and Lufthansa stewardess Gretchen—and Alitalia stewardess Gabriella. However, none of the women know about the other two, and this is exactly the way Bernard has designed it. This works just fine as long as their flight schedules only bring them home every three days. Bernard’s live-in maid, Berthe, is key in pulling off this ruse, managing three sets of clothing, photographs, bed linens, and food preferences.

However, his perfect schedule was bound to run into trouble sometime. Things begin to unravel when there is a change to the women’s flight orders, making it increasingly difficult to keep them apart, and eventually bringing all three of them home on the same day. In addition, Bernard’s longtime friend from Wisconsin, Robert Lambert, has arrived in town unexpectedly. Robert soon finds himself entangled in trying to help Bernard and Berthe manage the shenanigans over the course of a single day.

Will they survive the day? And at what price? It just may be too much for them to handle!

Note: The characters in this show are written with he/him or she/her pronouns with character descriptions stating a male or female gender respectively. Cascade Community Theatre values diversity and inclusivity, and we invite LGBTQIA+ actors, as well as actors of all races/ethnicities to audition for the roles they feel comfortable portraying.

Boeing Boeing is performed by arrangement with Concord Theatricals on behalf of Samuel French, Inc. www.concordtheatricals.com